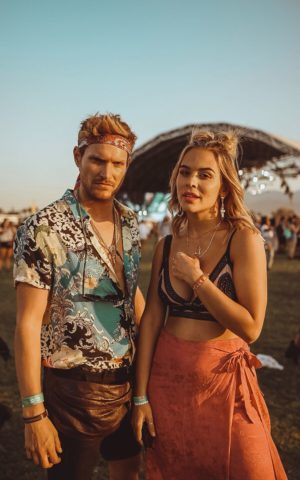 After sharing my Coachella outfits with you, I wanted to write about the festival’s untold truth – the kind of scoop you can only be privy to if you’ve actually been there. So here are Coachella’s secrets.

It’s SOOOOO expensive! First of all, compared to Osheaga that’s hosted here in Quebec, you can’t buy a single day pass. You can only get tickets for the whole weekend (general admission + shuttle $504 USD). That is, if you’re lucky enough to get your hands on presale tickets. If not, you’ll have to buy them from a reseller, who won’t hesitate to boost its price.

Also, for us Quebecers, you need to buy a plane ticket. If you purchase it early enough, it’ll cost you as little as $400 CDN roundtrip. If not, be prepared to pay between $1,000-1,500 CDN. Oh and don’t forget that you need to rent a car to get to Palm Springs (the closest city to Coachella Valley), which is at about a three hour drive from LAX, the international airport at which you land.

Finally, you obviously need to sleep somewhere, and that’s where things go downhill money-wise. Last year, my friend P.O and I camped in our car since it was the cheapest option. You arrive Friday morning to set up your tent, sleeping bags, mattresses, coolers, etc. You get everything ready while it’s 35oC out and the sun is beating down on you. Fun fun fun! You therefore obviously need to put some money aside to go to Wal-Mart to buy all of your camping equipment. Because let’s be real, you’re not going to bring it from Montreal by plane.

So, you have your little plot of land of about 300 feet2 (the size of a big bedroom) where you set up your tent AND park your car. If you straighten your arms, you could touch your neighbors’ tents, so forget about privacy. If they don’t want to sleep, I’ve news for you – neither will you. You shower in public restrooms that have been set up in RVs (waiting for an hour under the scorching sun obviously comes with it). You use chemical toilets all weekend. Hello, glam life! Forget about a nice place to do your makeup, your only option is to use your tiny car mirror. Oh, I almost forgot! At around 7 am, it becomes way too hot to stay in your tent, so you wake up super sweaty. The only good thing is that you’re already on the Coachella site, so you don’t have to suffer through traffic to get to and from the venue. ($113 USD for the weekend)

If you’re looking for an alternate option, I have friends who rented an RV parking spot. Super cheap, not too far from the venue (5 km away), intimate, and comfortable. But again, you need an RV, which I don’t have. ($400 USD for 3 nights)

This year, I went all in and stayed at a hotel for the weekend. But again, Palm Springs is a costly city, so get ready to pay a hefty price, which is about $400-$500 USD per night during Coachella weekend. My wallet is crying! And get ready to be stuck in traffic for an hour and a half each way to get to and from the site, which is really only 25 km away from your hotel. It doesn’t matter if you take a shuttle, have a driver, or use your own car, the traffic is the same and is really intense. But hey, at least you get to sleep in a comfortable environment.

Finally, there’s Airbnb. The only thing I don’t like about Airbnb is that the owner can cancel your reservation at the very last minute. If that happens, you’ll be stuck with little options, since hotels are fully booked months in advance.

All in all, let’s just say the weekend will cost you a couple thousand dollars! I’m pretty sure I’ll be eating peanut butter toasts for the next few weeks.

Osheaga’s site is spread across 56 acres and Coachella’s 642 acres (including parking and camping which account for a lot). Coachella is gigantic! There are six stages, which are all really far away from one another, so you walk A LOT! But at the same time, to host 125,000 people per weekend/day, they need space! Coachella hosts almost three times the number of people as Osheaga, which only welcomes 45K people per day.

Stars from everywhere in the world attend Coachella. Singers, actors, insta babes, they’re almost all there. Most of them go to the first weekend, which is why tickets sell out so quickly. If you’ve got a good eye and you wait at the VIP entrance, you’ll for sure spot a lot of them! The majority go incognito, without any bodyguard. P.O and I saw Macklemore, Katy Perry, Kellan Lutz, and Adam Lambert, just to name a few. However, mega stars like Rihanna stay in the VIP and GUEST zone with a bodyguard, which is understandable, since anyone would recognize Rihanna and flip out!

Coachella is for fashionistas. Everywhere you look, outfits are on point! The only problem is the freaking temperature. Coachella is in Coachella Valley, in the Californian desert. Who says desert says intense heat. However, as much as daytime temperature can rise to 35oC, the same night, it can get as cold as 17 oC. Jean jackets and hoodies are therefore a must. Insta babes are often changing outfits from day to night, and the drop in temperature when the sun goes down is one of the reasons why!