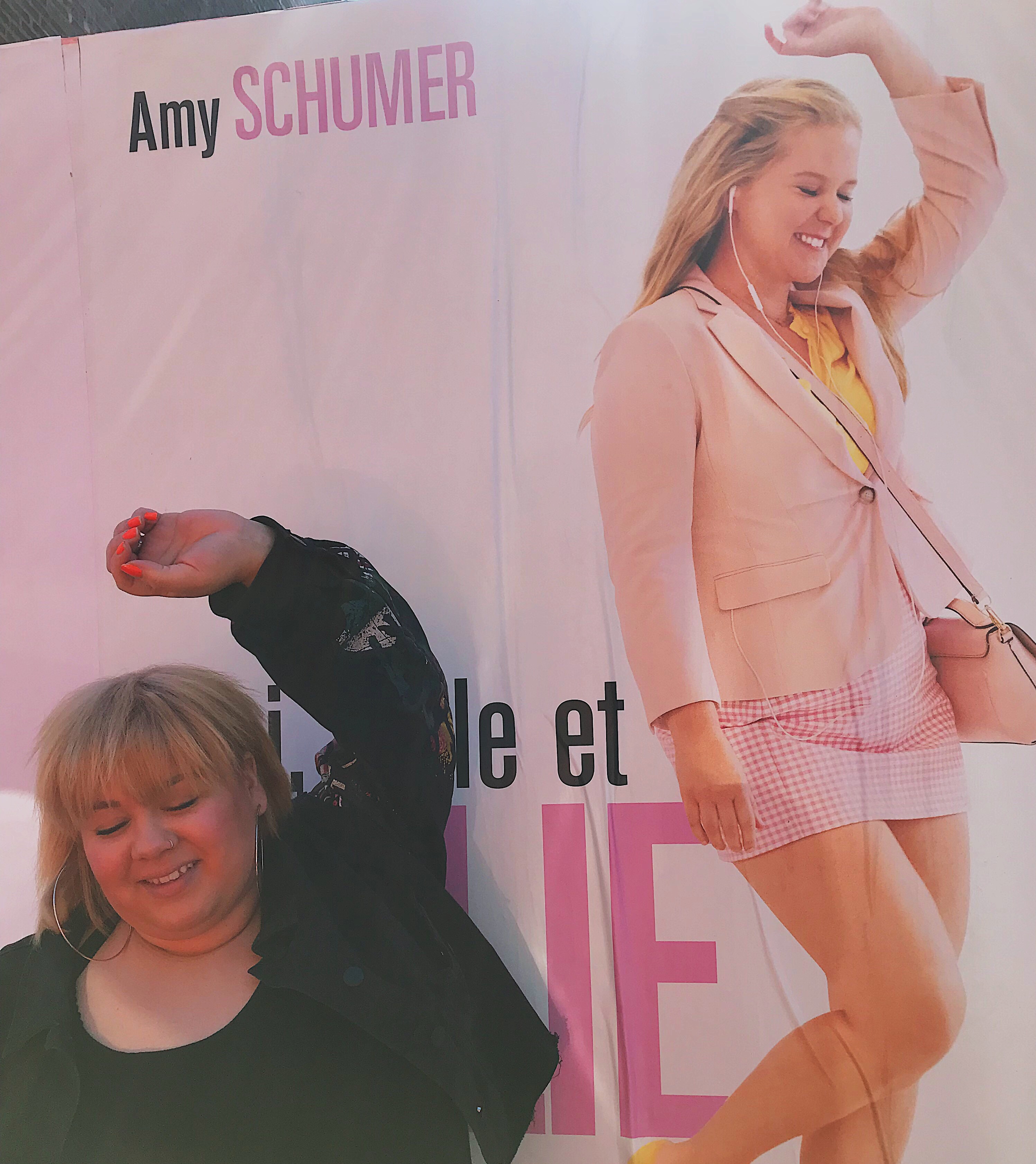 I was among those who were at the Starcité theatre on Monday, April 16th for the premiere of the movie I Feel Pretty. It stars Amy Schumer, Michelle Williams, and Busy Philipps – and if you don’t go to the bathroom for 15 seconds in the middle of the movie, you’ll also be able to see model and actress Naomi Campbell.

A quick summary for those who have never heard of the movie or seen the trailer.

Renee Barrett (Amy Schumer) is an ordinary girl who leads an ordinary life and has a blatant lack of self-confidence. One day, during a spinning class, she falls and smashes her head. When she wakes up, her life has completely changed. She sees herself – brace yourselves ladies and gentlemen – as BEAUTIFUL. Yes, her thighs are thinner, her jawline is defined, her belly is flat and for once in her life, her confidence is high.

For the rest of the movie, the concussed girl believes that her body is as she always dreamed. Having the confidence of a bull running towards a red handkerchief helps her get what she wants even if in reality, her body is the same as it was before. We thus meet the man who will become her lover, observe the advances of her boss who looks like an Armani underwear model, watch her rise in the company for which she works (selective company that only hires fabulously thin and beautiful people), see her participate in a bikini contest, and so on.

It’s by losing her friends that she realizes that in the end, beauty doesn’t solve everything. Then, just as she becomes aware of the harm she’s done to others, she goes back to being the little Renee she’s always been. BIG WAKE UP CALL AT THIS MOMENT, where Renee notes that self-confidence is the most beautiful asset anyone can have. THE END.

Just before I get into it, I want you to know that I went to see this movie with the absolute best intentions because Amy Schumer is funny and she had a very different cast.

But let me begin…

I agree that self-confidence is beautiful. It can change lots of things in a person’s life – I’ll never disagree with that that. However, I had trouble watching a pretty girl, who was a little plump, with good friends and a respectable career, devalue herself that much. I know, everyone has insecurities, no need to look like Quasimodo to feel less sexy. BUT still, beauty has become such an obsession that Renee Barrett went outside in the pouring rain and begged a statue to become beautiful by throwing a penny in the air. It hurt to watch. It’s sad to see someone hating themselves that much.

We also notice that throughout the film, those she compares herself to are basically all models. I know that Amy Schumer defended herself in the media after the release of the trailer, saying that size and weight were not the problems that the film wanted to point the finger at. So why only show us women worthy of a Victoria’s Secret catwalk? Probably to make the comparison REALLY evident with the actress. Side note, we know that the story is based in the States… show us real people living in the States, especially when 40% of Americans are overweight. You know what I mean?

I know it’s all fiction because it’s a movie, but it was so annoying to see that little Renee is judged everywhere she goes. There’s even a scene where a saleswoman kindly tells her that her shop does not sell her size. BUT RENEE MUST WEAR A SIZE 12. ONY CHILDREN’S STORES AND ASIAN CLOTHING SHOPS DON’T SELL SIZE 12 CLOTHES !

I was insulted. Why does nobody ask me to leave Zara? I wear a larger size than a 12… odd, or maybe sellers think that I’m shopping for a thin niece?

In short, to return to the topic of the desperate quest for beauty. Do you not find it ridiculous and degrading that a woman is incapable of feeling good about herself? That healthy self-esteem is so difficult to attain? Social media is to be blame, you’ll likely say. It’s so easy to feel ugly beside Insta babes. You’re partially right. My opinion about social media is that we can decide what we want to see. If you want to follow Heidi Klum and compare yourself to her, go ahead, but remember that SHE’S A MODEL. I personally use my channels to help me feel good about myself. I follow people who inspire me, who look like me, or who make me think. You don’t have to compare yourself to the people you’re not and especially those that you don’t really know. You don’t know what battles they’re fighting. Let’s stop criticising our differences. This is a large part of the problem.

I have so many things I still want to write, but it’s time to wrap up this post. I know, you don’t want me to stop and you’re wondering how long you’ll be able to survive without reading my sweet and meaningful words. I understand, but as they say, all good things must come to an end.

P.S. Besides body image disparagement and the glorification of beauty, I enjoyed some jokes and scenes where they showed that “beautiful” people also have problems. EVERYONE HAS PROBLEMS AND INSECURITIES, OK? I won’t rate the movie, as it’s my opinion and everyone is entitled to one, so you can also make up your own.

The link to see the preview is here!